One of the most common questions I get about how Khan Academy operates is about Sal Khan and what he does these days. Surely, he doesn’t make videos anymore… After all, Khan Academy has plently of traction now–Sal can get other folks to do videos. He’s probably got more important stuff to do.

Well, that’s what I thought, too. Until last week’s team meeting, when it was Sal’s turn to give his weekly update. He mentioned a few big meetings he attended, some upcoming partnerships, and then talked a bit about the Common Core. And speaking of the Common Core, he said, he had just made NINE videos THAT MORNING to add to Khan Academy’s Common Core math collection. 9 videos. In one morning. And here I thought Sal didn’t make videos anymore.

But the fact that Sal still makes so many videos (he made 30 that week) is interesting not because he’s the only one still making videos. In fact, he’s not: Khan Academy has hired several talented people to also make videos (including Brit Cruise, Vi Hart, Rishi Desai, Beth Harris, Steven Zucker and others) and is working on all sorts of cool partnerships for more content.

The reason it’s interesting is that over the several years Khan Academy has existed, Sal has received countless opportunities to stop making videos and spend more time doing other things. Instead, he has chosen to continue making videos. His routine involves coming into work early in the morning and using the first half of his day to make anywhere from 3-10 videos. Once he’s done with that, he’ll attend any meetings, respond to emails, and do other management-type tasks. But the first thing he does in the day is make videos. It’s this deep prioritization of working on the core content of the site (and on his core competency–absorbing and distilling information and teaching it engagingly) that led to Khan Academy’s huge growth.

Think about it. What made Khan Academy so cool that people started talking about it and spreading the word? Not just that it just had a couple cool math videos. When people went to khanacademy.org, they’re reaction was “Damn, they have so many videos!” When Bill Gates found Khan Academy, he was awestruck by breadth of content on the site–which led to a chain reaction of attention that skyrocketed Khan Academy’s growth. 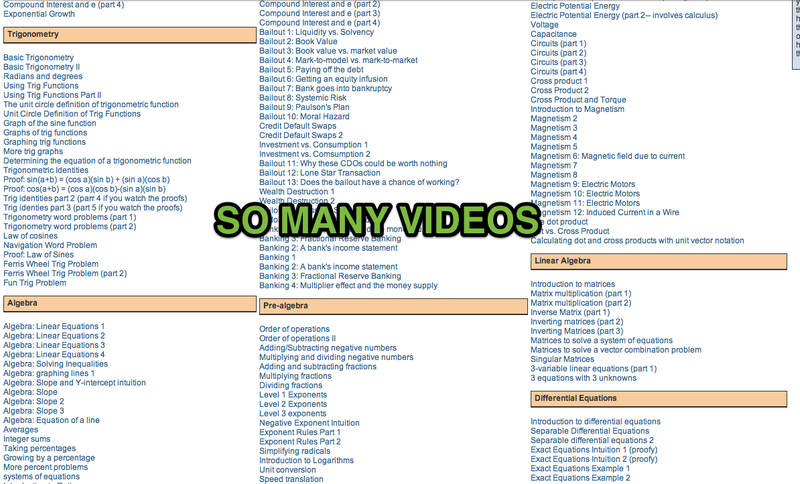 Basically, he put in the work. And he continues to do so. At this point, if Khan Academy loses all its funding, and we all have to find new jobs, it would not be surprising to me if Sal continued to make new videos. And when our grandkids stumble upon his elementary calculus video and have that “aha” moment…we’ll be glad he did.