Last weekend was Khan Academy’s 2nd Annual Healthy Hackathon! It was a fun weekend, and the resulting projects were amazing. I was blown away by what built–from a new iPad app with support for interactive exercise to a Python version of our API to a full Blackberry app for Khan Academy to a full computer made of nothing but logic gates. The biggest difference I saw between this hackathon and every other hackathon I’ve been to (other than the healthy part), was that almost everything was built to be shipped. The fact that it was a company/internal hackathon explains some of that, but even so, it was clear that building something useful and/or passion-driven mattered more than winning the competition. I have seen the competion aspect of hackathons lead to a lot of flashy and hollow projects that are dropped after the event. Not so around here.

As for myself, I worked on a fun project with James Tynan, Matt Dunn-Rankin, and Julia Lee. Our idea was to use celebrity personalities to encourage a growth mindset in Khan Academy learners. How? We made it so that in the same place where you add a real-life coach on Khan Academy, you could now add an “Inspirational Coach”–anyone from LeBron James to Abraham Lincoln. This inspirational coach would pop into your learning dashboard every once in a while to either congratulate a streak of consistent effort or give encouraging message when you hit a dry spell. (Note: the learning dashboard is a new feature and you may not have it till Fall 2013)

For example, let’s say you add Abraham Lincoln as a coach. You might get a video like this (thanks to Sal for the Lincoln get-up and James for the excellent delivery):

Now, let’s say you’ve also added Lady Gaga as a coach. When you successfully complete three tasks in a row, Gaga (portrayed here by the awesome Eliana Feasley) might pop into your task queue with a congratulatory message.

Let’s say you’ve also added a famous athlete as a coach. (Yes, clearly you can add a lot of coaches.) And while doing a particular task, you struggle to get it right on several attempts, but then you persist and eventually complete the task. Our athlete might jump in with an encouraging story from his career when he too persisted through difficulties to reach success.

Finally, after some intitial success on Khan Academy, life gets in the way and you altogether stop visiting Khan Academy. Three months pass by, and one day, you open your email and are surprised to see an email in your inbox from none other than… Abraham Lincoln.

You click the link in the email, and then find this message from Coach Lincoln:

Man, James does a good Lincoln, no?

On the technical side, one of the key aspects of the project was adding video tasks to the learning dashboard, which previously only allowed for exercise tasks. With some help from roaming hacker Marcia, we were able to use some already-written code to push this relatively quickly. Then it was a matter of 1) registering when a user actually completed these videos, 2) adding these tasks intelligently based on the user’s activity.

The result was a pretty seamless experience of inspirational video tasks popping in and out of the user’s learning dashboard: 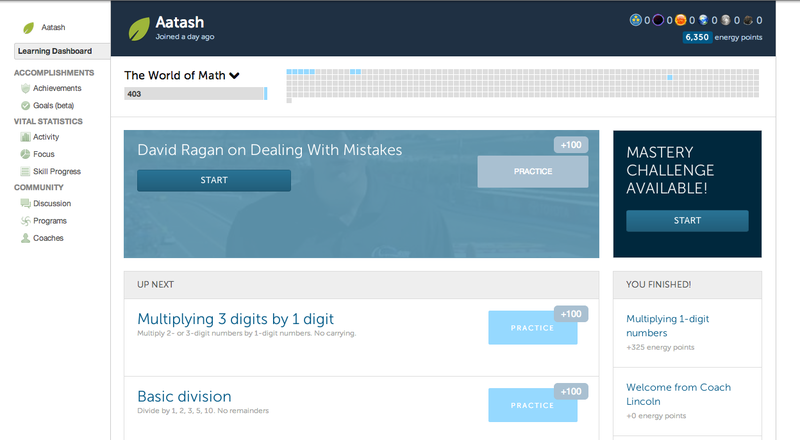 The next “task”: get some real celebrity footage, improve + clean up the code, and ship it!

The next next task: find other ways to incorporate growth mindset and other important soft skills into Khan Academy. Let me know if you have any ideas!