A couple weeks ago, I donated a little poster to the Khan Academy office: 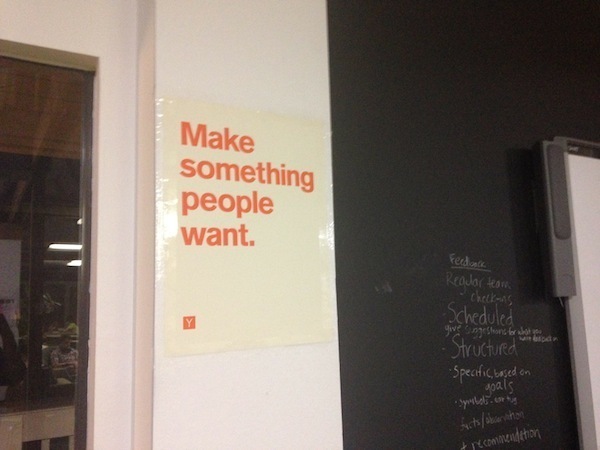 I got it from here, and it represents YCombinator’s unofficial motto.

But the reason I put it up (other than the fact that it had been sitting unopened in my apartment for months…) is that it already seemed to be a philosophy practiced strongly at khan academy, namely on the engineering team. So I thought it was very fitting to be on the wall.

So what does it mean?

It’s harder than it sounds. Too often, we as engineers want to build out a bunch of features we think are useful. Or even if we don’t, people ask for them or suggest them and they slowly creep onto the to-do list.

But often these features have been added or requested without the due diligence (i.e. talking to your users) required to confirm that it is something our users actually want. That it’s not just a nice-to-have for the one-off user, but something that solves a critical pain point or greatly improves the product for a substantial amount of users.

When you stop and ask the question, “Is this something people really want?” you might not only end up with a product vastly different from the one you imagined in your head, but you also might end up saying “No” to a lot of requests. And saying “No” ain’t easy. Especially when someone else on the team really wants a feature to be built.

At Khan Academy, I see every to-do item and feature request being questioned. Is this something the user really needs? Can we ship the product with this minimal thing that we know they need, and then think about this other (optional?) thing later? In other words, can we punt?

In a world where there’s too much to do and not enough time to do it, this focus on the essential goes a long way in making sure we get stuff out the door and into our users’ hands. And if we’re doing our job well, then we know it’ll actually be stuff that they want.